iceland with an infant 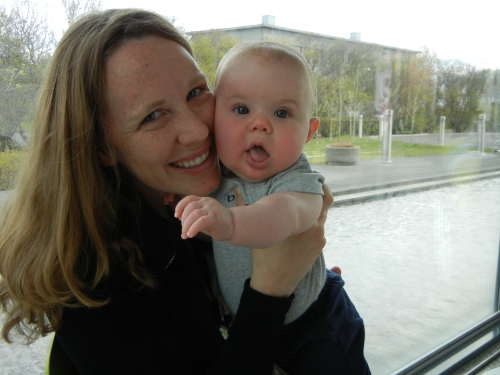 He came back to the table, sat down, looked at my plate and looked at me with a teasing glint in his eyes.

“You like that?” he said as I chewed a bite of what I thought was beef stew.

Pony is a delicacy in Iceland. A. and I were in Hveragerdi, a town in southwest known for its geothermal springs. There’s an agricultural university, several hot springs and greenhouse after greenhouse. And we were eating from a traditional Icelandic buffet. Pork, lamb, carrots, cod with cheese — and pony. A. had eaten horse sausage from a buffet earlier in the week — not knowing what it was — and when we both found out from our waiter (“I’m afraid to tell you what you are eating,” he said), I had turned down the corners of my mouth in disgust. So A. thought it was hilarious that I was eating pony.

It was one of our adventures on our first international trip with C.

I wanted to push the limits, to see what it was like to travel with a 5 1/2 month old. Turns out, C. is a little trooper. Iceland was a good choice because it’s a 5 1/2 hour flight direct from D.C., inexpensive (to fly there, not to eat there) and baby-friendly. There are little high chairs in the restaurants (we put C. in three of them, including one that doubled as a rocking boat) and beautiful changing stations in the bathrooms.

I was nervous about the overnight flight — that it would mess up C.’s sleeping or he would freak out while others were sleeping.

But C. slept 4 out of the 5 1/2 hours. When we checked into our guesthouse in Reykjavik, we took a four-hour nap as a family, C. nuzzled in between us. The first two nights it was tough to get him to fall asleep. It never really gets dark there in May. But he adjusted to an 11 p.m. bedtime (6 p.m. in D.C.) by night three and was sleeping soundly. And his late bedtime made for a smooth transition when we got home.

We didn’t want to be in the car too much, so we didn’t get very far. But what we did see of Iceland is beautiful — and we vowed to go back to see more.

We spent three nights near Vik, on the southern coast.

We went on a short glacier hike. Our guide, Johanne, joked with another guide that C. was setting a world record for youngest person to hike a glacier and that he was wearing baby crampons.

We hiked Dyrholaey to the lighthouse and looked down at natural rock formations, the black sand beach and nesting white birds. I was giddy it was so peaceful.

We ate cauliflower soup and amazing homemade bread at the cafe downtown (the only cafe in the town of 300).

And then, in Hveragerdi, we ate pony stew and swam in an outdoor heated pool in 40-degree weather. 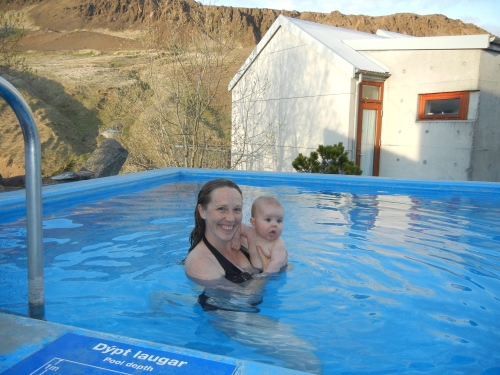 On the trip, we played with C. A lot.

I don’t think our boy has had this much concentrated attention from both of his parents since he was born. It was clear that he loved it — lots of smiles and giggles.

And we learned the most important thing about traveling with an infant: Never leave home without duct tape. We used it to plug the drain for C.’s bath, tape the shade to the wall where the light was bleeding through and cover C.’s poop explosion in his car seat on the plane ride home. What poop? We don’t see any!

Oh, and I learned that pony actually tastes pretty good — not that I ever plan to eat it again.

5 responses to “iceland with an infant”